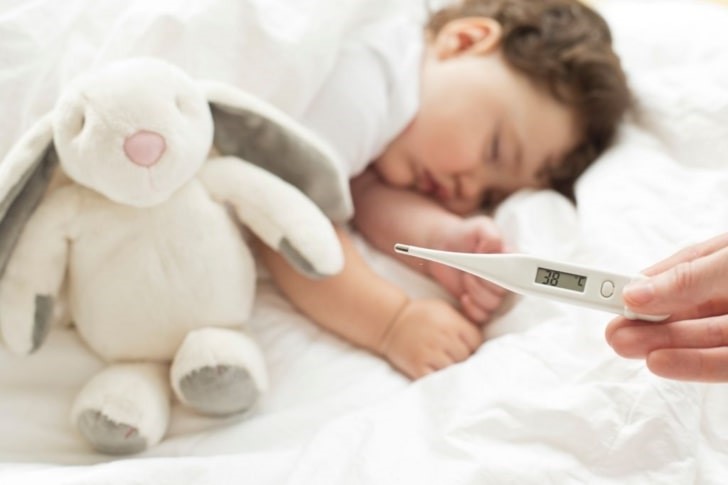 There is a lot of debate about whether a teething fever is real. And to parents going through the teething phase with their babies, it certainly may seem so. The reality is, when babies have a fever, for whatever reason, it can send parents into a panic. And for good reason, fevers can be scary. But a fever is just the body’s way of trying to heal. Teeth pushing their way through sensitive gum tissue could certainly warrant a healing fever. But, there are many other reasons babies can have a raised temperature. The tricky part is listening to their communication without them describing what is going on.

Causes of Fever in Babies

Fevers are generally a sign that the child’s immune system is working to fight an illness. Fever itself isn’t sickness; it is a symptom there is something else going on. Typically, fever means that the baby is sick with a virus or has an infection. Sometimes it can mean that a baby is overheated from wearing too many clothes or being outside in the sun too long. Or, if they have recently had a vaccination, a fever could be a mild side effect. These are things to consider when determining the cause of a fever.

Is it a Teething Fever?

If a baby is teething they may have a slight spike in temperature. Doctors do not actually call this a true fever though. Doctors consider fever a temperature of 100.4 or higher. It is possible that parents could disregard a fever over 100.4 and blame it on teething, which would possibly keep their child from receiving needed medical care. If teething, babies will display other teething related behaviors and not show signs of sickness. Teething babies drool more, chew on fingers and toys constantly, have irritated or inflamed gums, and seem more fussy or cranky than usual.

Is it a Fever from Illness?

The signs of sickness in babies can seem similar to teething signs because they may want to be held more, seem fussy and cranky, or even feel warm to the touch. But there are a few very different signs to watch out for. These are poor sleeping, not eating, lethargy, coughing and sneezing, vomiting or diarrhea, a rash other than just their face, or they’ve had symptoms for a couple days. Babies with these symptoms are possibly in need of medical attention and concerns should be directed to a family doctor or pediatrician. Checking with a doctor can ease parent’s worries over what may be causing a fever.

In the end, it doesn’t really matter if a teething fever is a myth or not. The reality is, teething can be painful for babies and upsetting or frustrating for parents. Adding a rise in body temperature isn’t going to make baby feel better either. So, it is important to remember that teething is a temporary developmental stage and symptoms typically are less bothersome as babies get older.